When Rufus Putnam and his company of pioneers arrived at the confluence of the Ohio and Muskingum rivers, they were welcomed by a party of Delawares led by Captain Pipe. Rufus Putnam appreciated the welcome and believed the Delawares were friendly. Captain Pipe said, “As long as the sun and moon endured, the Delawares, Wyandots, and Yankees shall be friends and brothers.” (The Pioneers, page 34)  Directors of the Ohio Company of Associates believed they had legally purchased from the U.S. government about one million acres of land in the Northwest Territory, located in what is now southeastern Ohio.
The government had negotiated treaties with various Native tribes for land in the Ohio Country. Some of the treaties were signed by some of the tribes, but rejected by others. Sometimes representatives who signed the treaties did not have permission from their tribes to do so. Even so, the U.S. government claimed the land and sold about one million acres to the Ohio Company of Associates, who purchased it in good faith.
Rufus Putnam, Marietta, letter to Caleb Strong, Massachusetts, January 6, 1791:  “We purchased our lands under an idea that they had been fairly obtained from the natives, for government told us so by their public acts. This however the Indians on our arrival in the country told us was not true, and if the treaties made with them prior to our coming are consulted I believe it will appear the Indians are right and that the lands were rather wrested than fairly purchased from them.”
While the New England settlers at Campus Martius and Picketed Point were spared from more than random individual attacks, there was a constant threat, both here and throughout the western lands. In 1790, Henry Knox, Secretary of War, ordered Josiah Harmar to end the violence in western Ohio. Harmar marched from Fort Washington in Cincinnati with about 300 regular soldiers and 1,000 militiamen, mostly from Pennsylvania and Kentucky to attack the Miami, Shawnee and Delawares in the western Ohio Country. The troops were poorly trained and sound defeated. Relations between the parties were made even worse.
The closest major attack occurred about 30 miles up the Muskingum River on January 2, 1791, at Big Bottom, now known as Stockport. A settlement had been made there, but the dwelling was not adequately secured. A party of Indians attacked the cabin, killing 14 people, including a woman and two children. The woman was the wife of Isaac Meeks, and it is said that she severely injured one of the Indians with an axe when she saw her children being murdered. (Isaac Meeks was a Virginia hunter and may have been one of the earliest settlers of Williamstown.) Three people were taken as captives.
In November of 1791, Arthur St. Clair, governor of the Northwest Territory and veteran of the American Revolution, led about 2,000 men (one third were poorly trained militia and another third were conscripts or draftees) against the tribes of the Northwest Territory in the Battle of the Wabash, also known as St. Clair’s Defeat.  In 1794 the tribes were defeated at the Battle of Fallen Timbers in northwestern Ohio by forces led by General “Mad” Anthony Wayne. In 1795, the Treaty of Greenville ended the conflicts and limited Native lands to northwestern Ohio. The tribes were given goods to the value of $20,000.
The New England settlers were impressed by the ancient earthworks, relics of the earlier Native American Hopewell culture, and made efforts to preserve these sites with an official resolution: “Resolved, unanimously ... that every prudent measure ought to be adopted to perpetuate the figure and appearance of so majestic a Monument of Antiquity.” 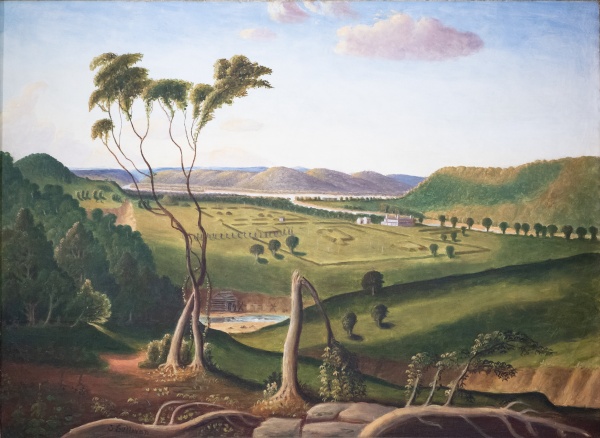 Depicting the site of Marietta about 1790, this landscape features a view of the Hopewell's ancient earthworks complex, alongside Campus Martius, the fortification of the Ohio Company. Crossing the center of the scene is a line of figures often interpreted as Native Americans. Fort Harmar is visible along the Ohio River in the distance.

What do you think was the purpose of the small cabin in the foreground? 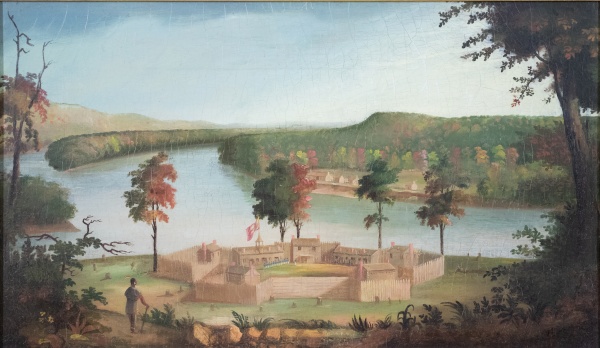 Construction of Fort Harmar, a United States military post, began in 1785 on the west bank of the Muskingum River at its juncture with the Ohio. Named for General Josiah Harmar, the fort was pentagonal in shape and covered three-fourths of an acre. Its original purpose was to protect government land from squatters. The Virginia settlement of Isaac and Rebecca Williams is seen across the Ohio River in the background.

Do you see the soldiers inside the fort? 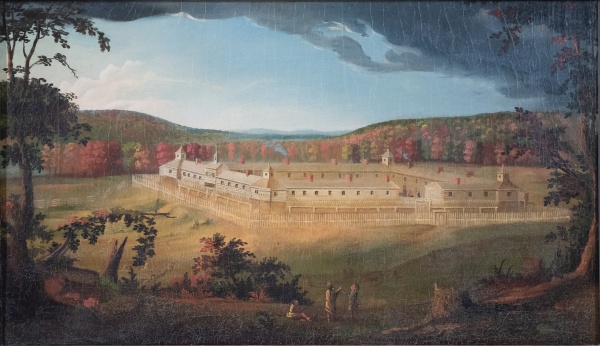 Completed by the Ohio Company of Associates in 1791, Campus Martius was located on the east bank of the Muskingum River, about a mile from the Ohio. Blockhouses stood at each corner, and dwelling houses lined the 180-foot-long sides. Rows of palings or pickets, enclosed the structure. An 80-foot-deep well was dug at the center to supply water in case of a siege. It was estimated that 900 people could shelter within, though less than half that number made their homes there.

Do you see the Native Americans in this scene? What might they be thinking as they view the stockade in the distance? 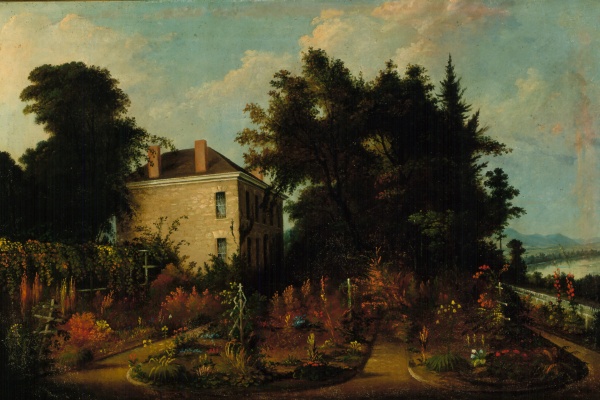 Located along the Ohio River between Marietta and Belpre, the Cutler family's "Old Stone House" was completed in 1809. "A goodly house for the day," the walls were of sandstone quarried from the nearby hills. The beautiful gardens, containing at least 89 varieties of flowers and shrubs, were the pride of the Cutler women.

Can you identify any of the flowers in the garden? 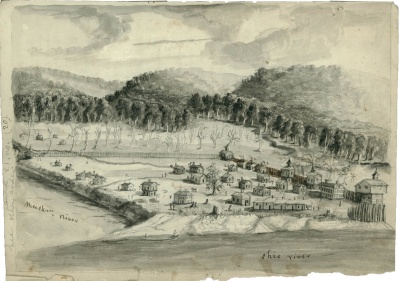 Many of Marietta’s earliest pioneers built their homes and businesses on the east bank of the Muskingum River at its confluence with the Ohio. During the Indian Wars of 1790-1795, three sides of the area were protected by walls of pickets. A list of names with numbers identifies the residents of Picketed Point:

Can you locate Dudley Woodbridge’s store? 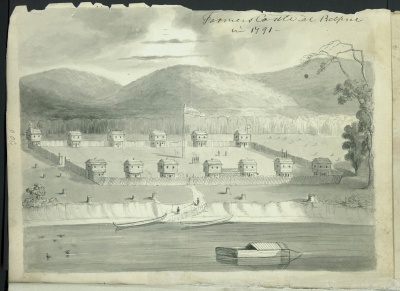 Built and occupied by farmers, “Farmers Castle” was constructed in Belpre in 1791 to protect 30 resident families from Indian attack. It was located near the Ohio River in the vicinity of Backus (Blennerhassett’s) Island. Thirteen blockhouses, built of round logs, were arranged in two rows, with a wide roadway between. Ten-foot-high oak pickets surrounded the community.

Can you find eight people in the drawing? 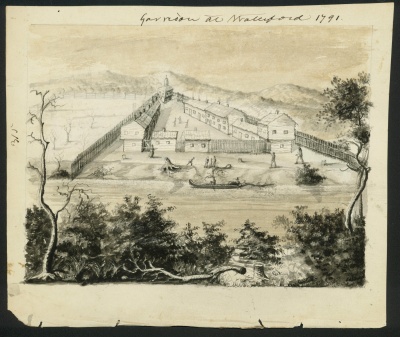 The garrison at Waterford, called “Fort Frye,” was named for its designer, Lieutenant Joseph Frye. Built in 1791, it was located on the east side of the Muskingum River about 20 miles above Marietta. The fort covered three-quarters of an acre of ground and was triangular in shape, with a blockhouse at each corner. It was protected by a line of palisades twelve feet high.

How is Fort Frye different from Farmers Castle and Picketed Point? How is it similar?