Manuscripts and Documents of the Ohio Company of Associates: Background Information

The Ohio Company of Associates grew out of a petition to "his Excellency, the President and Honorable Delegates of the United States of America in Congress assembled," framed by Brigadier - General Rufus Putnam, acting for a group of officers encamped at Newburgh, New York, in the last year of the Revolution (1783). Signed by 288 officers "in the Continental line of the army," the petition reminded Congress of its promise of "certain Grants of Land" to officers and soldiers who served to the "establishment of Peace." The petitioners asked that the grants be located in the Ohio country and that provision be made for the sale of additional land "to such of the Army as wish to become adventurers," that is, investors in the frontier. Putnam forwarded the petition to General George Washington, Commander-in-Chief of the American army, with the request that he lay it before Congress, together with his own commendation.

Washington forwarded the Newburgh petition to the Congress of the Confederation without immediate result, but Putnam continued his interest in land in the West. In 1786 he and General Benjamin Tupper drew up a circular describing the riches of the Ohio country and inviting those persons who wished to become "adventurers" to join in an association, with the object of acquiring land there and promoting settlement. On March 1, 1786, at a meeting at the Bunch of Grapes Tavern in Boston, representatives of potential investors from eleven counties in Massachusetts formed the Ohio Company of Associates.

In the course of a year 250 investors acquired shares in the Ohio Company. On 8 March 1787, the Company appointed three associates, Putnam, Samuel H. Parsons, and the Reverend Manasseh Cutler to apply to the Congress for 600,000 acres "northwest of the River Ohio," to be paid for in depreciated continental currency or in military rights, that is, land bonuses to which veterans were entitled. Acting for the committee, Parsons presented the Ohio Company's proposal to Congress, without success.

In July, 1787, Cutler, a man with wide contacts in the American states, arrived in New York City (where Congress then met), to try anew on behalf of the Ohio Company for a grant of land in Ohio. Initially he asked Congress for a million acres, but as the days passed he changed his proposal. In the end, acting not only for the Ohio Company but also for a syndicate of New Yorkers that came to be known as the Scioto Company, he agreed to two contracts that together provided for the purchase of 3,000,000 acres, but because the contracts were separate the Ohio Company was able to pursue an independent course.

The contract between the Board of Treasury of the United States (which then administered land affairs), and the Ohio Company stipulated the sale to the company of 1,500,000 acres in what is now southeast Ohio for $1,000,000. The contract acknowledged the payment of one-half the purchase price, the second $500,000 to be paid one month after the completion of a survey of the exterior lines of the tract. Within seven years the company was to provide the federal government an internal survey of the grant "Laid out and divided into Townships [six miles square] and fractional parts of Townships and also divided into Lots," according to the Land Ordinance of 1785. In addition to the company's purchase, Congress granted lot (that is, section) sixteen in each township for schools, lot twenty-nine for purposes of religion, and two townships for a university. Sections eight, eleven, and twenty-six remained "Congress lands." Samuel Osgood and Arthur Lee signed the contract for the Board of Treasury; Cutler and Winthrop Sargent for the Ohio Company. 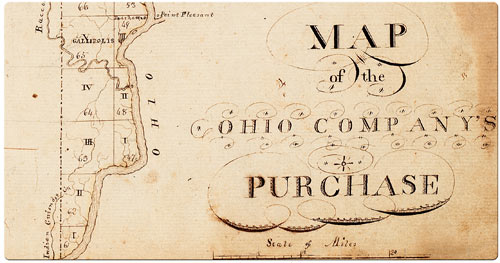 The "Map of the Ohio Company's Purchase" shows ranges and townships, major settlements, and waterways. Most ranges are accompanied by a list of names on the facing page identifying the original proprietors of each lot. (Series 4, Box 1, Folder 3, Item 13, 0007)

Appointed superintendent of the Ohio Company, Putnam arrived at the confluence of the Muskingum and Ohio Rivers on 7 April 1788 with a company of men to found a settlement, subsequently named Marietta. While the work of surveying, clearing, and building went on, the company's directors attempted to raise the remaining $500,000 owed to the government. In October 1789 Richard Platt, a New York merchant and the company's treasurer, reported that shareholders were almost $300,000 in arrears for their subscriptions of company stock, but had all of them paid up, the company still would have been short of the money that was owed. In addition, trouble with the Indians on the company's land meant the hiring of guards, the building of fortifications, and the curtailing of settlements. In 1790 Congress accepted a plan proposed by Alexander Hamilton, Secretary of the Treasury, to fund all outstanding federal and state debts, a plan that effectively raised the depreciated currency to par value. Investment in the Ohio Company dried up. In 1792 Platt went bankrupt, owing the company some $50,000.

By that time the directors of the company had abandoned hope of meeting the terms of the contract of 1787. They were unsuccessful in negotiating a reduction in price for the original 1,500,000 acres, but on 23 April, 1792, Congress confirmed the company's right to the 750,000 acres for which they had paid, and granted an additional 214,285 acres for locating army bounty rights, and another 100,000 acres contingent on their being given in lots of 100 acres to actual settlers - the so-called "Donation Lands." The company received patents (or deeds) for all three parcels.

"There remains not much to be said of the Ohio Company," according to Alfred Mathews, writing in H.Z. Williams & Brother's History of Washington County, Ohio (1881). "When the final settlement was made with Congress its mission was practically closed." At a meeting of the company held at Marietta in late 1795 and continuing into early 1796, the directors and agents of the company made a final division of land among the 819 shareholders. When the division was completed, each share had been allocated 1,173 acres, divided more or less as follows: one city lot, one three acre lot, one eight acre lot, one 100 acre lot, one 180 acre lot, one 260 acre lot, and one 640 acre lot. Thus ownership of the land passed from the company to individuals, who were free to use or dispose of it as they willed. But a vestige of the Ohio Company was to linger on for many years, thanks to the interest of Nahum Ward.

In the treasury of the company at the time of the final division of its assets was a sum of Georgia's Revolutionary War currency that had not been accepted by the United States at the time of the Hamiltonian assumption of state debts. Thinking it worthless, the directors of the company failed to distribute it to the shareholders at the time of the final settlement. Ward, who arrived in Marietta in 1810, saw a possibility for profit in the certificates, and in order to gain possession of them bought up shares of the company, which he usually acquired for very small amounts. For years he fought in the federal courts for the government to pay the face value of the currency he held, plus compound interest from the date of issuance. The Supreme Court finally settled the case, finding against Ward's claim, in 1870, nine years after the claimant's death. The court's decision effectively ended the affairs of the Ohio Company.