Manuscripts and Documents of the Ohio Company of Associates: Rufus Putnam 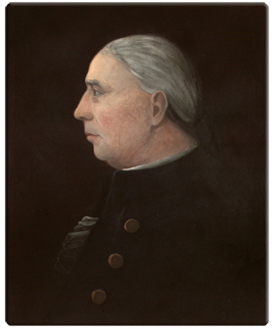 Rufus Putnam (9 April 1738 – 4 May 1824), Revolutionary War officer, founder of Marietta, Ohio, was born at Sutton, Massachusetts, the youngest of the six sons of Elisha Putnam and Susanna Fuller Putnam. His father died when he was seven years old and for the next two years he lived with his maternal grandfather, Jonathan Fuller. In 1747 Putnam’s mother married John Sadler of Upton, Massachusetts, and until 1753 Putnam lived in his stepfather’s house. In 1754 he was apprenticed to Daniel Mathews of Brookfield, Massachusetts, a millwright.

Mostly self-educated, Putnam in his adulthood recalled that until the age of nine he was sent to school “as much as children usually were in that day,” but during the six years that he lived with his stepfather, a man who had contempt for education, he attended school for only three weeks. On his own he continued to study writing, and arithmetic “from the book.” All his life he regretted his lack of knowledge of spelling and grammar. At some point he learned surveying.

Putnam’s military career began with the French and Indian War (1756 – 1763), during which he enlisted for several tours of duty in the Massachusetts provincial service. He saw action in northern New York and also worked building mills and fortifications for the army, an occupation not always to his liking. In June, 1760, he received an ensign’s commission and joined his company at Ticonderoga, where he remained until discharged in November of that year.

In March, 1761, Putnam began business as a millwright, his chief occupation for seven or eight years, after which he farmed and was also employed in surveying until the outbreak of the Revolution. On 6 April 1761, he married Elizabeth Ayres of Brookfield, Massachusetts. She died within the year, leaving an infant son who also died shortly. On 10 January 1765 Putnam married Persis Rice of Westborough, Massachusetts, who lived to 1820 and by whom he had nine children.

When it was reported in 1772 that the king of England had authorized a grant of lands in West Florida to the colonials who had served in the French and Indian War, Putnam was chosen a member of a committee to explore the lands. He ultimately traveled with a party almost 400 miles up the Mississippi River in search of the best acreage, but the governor of West Florida never received the king’s order. Putnam felt that he had wasted eight months on the expedition, but the experience was doubtless valuable to him later.

When the American Revolution (1775 – 1783) broke out Putnam entered military service as a lieutenant colonel in a regiment commanded by David Brewer. He continued in the army until the end of the war. On 17 June 1775 he took part in the battle of Charlestown. He helped plan fortifications around Boston and later claimed that he had been responsible for the Americans’ taking of Dorchester Heights and therefore the British evacuation of Boston. It was at this time that he came to know George Washington, who was to remain Putnam’s patron until his death in 1799. Putnam also worked on fortifications in Rhode Island and New York. On 11 August 1776 Congress appointed him an engineer, with the rank of colonel, and in the same year he accepted a regiment in the Massachusetts Line of the continental army. For the next four years he was stationed in upstate New York, part of the time under the command of General Robert Howe. He spent most of the winter and spring of 1781 in Boston lobbying the General Court in behalf of the Massachusetts soldiers. Toward the end of the war he received a brevet promotion to brigadier general.

In the last year of the war, acting for a group of officers encamped at Newburgh, New York, Putnam framed a petition to the Congress of the Confederation asking that land promised to officers and soldiers who served to the end of the war be located in the territory northwest of the Ohio River. Back home in Massachusetts Putnam continued his efforts to interest army veterans and others in western “adventures,” but when he learned in 1784 that Congress had not acted on the Newburgh petition, he agreed with the Massachusetts Committee on Eastern Lands to survey the state’s lands in present Maine. He spent most of his time for the next three years on this business, even while he served a term in the Massachusetts General Assembly (1787), and continued to promote the western country.

Early in 1786 Putnam and General Benjamin Tupper drew up and promoted a circular describing the riches of the Ohio Country and, together with representatives from several counties in Massachusetts, formed the Ohio Company of Associates, the purpose of which was to acquire and settle land in the Northwest Territory. In 1787 the company contracted with the federal government to purchase a million and a half acres in what is now southeast Ohio, to be paid for in depreciated continental currency and military land warrants. Appointed superintendent of the company, Putnam arrived at the mouth of the Muskingum River on 7 April 1788, with a company of men to found a settlement and survey and allocate the land. Named Marietta, the settlement was the first organized one in the Northwest Territory.

The alphabetical List of the Original Proprietors of the Ohio Company, in Rufus Putnam's handwriting, provides a rough alphabetical list of proprietors, together with the Company's lot numbers and the ranges, townships, and sections in which the lots were located, as drawn in the six land divisions, 1788-1796. (Series 4, Box 1, Folder 3, Item 1, 0001)

The work of surveying, clearing, and building in the Ohio Company purchase proceeded under Putnam’s direction. In November, 1790, he brought his family to Marietta, where he lived for the rest of his life. On 27 September 1792, his promotion to brigadier general confirmed (5 May 1792), he negotiated the Treaty of Vincennes with the Indians of the lower Wabash River, a treaty the senate failed to ratify. Pacification of the Indians awaited the Treaty of Greenville (1795).

At Marietta Putnam established the Ohio Company land office, where he oversaw the affairs of the company. He helped set up the local government. He worked to establish a postal route in the Ohio Valley and was instrumental in settling the French immigrants at Gallipolis. In 1796 President Washington appointed Putnam surveyor-general of the United States, a position he held until 1803. He was a delegate to the Ohio Constitutional Convention in 1802, but as a Federalist he lost political power with the ascendancy of the Jefferson Republicans in the early nineteenth century. He helped establish the Congregational Church and the Muskingum Academy at Marietta, and Ohio University at Athens (1804). He died at Marietta at the age of 86 and is buried in Mound Cemetery, the resting place of many of his fellow officers of the Revolution who followed him to the West.